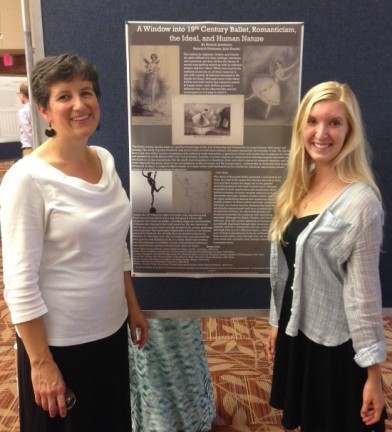 Last June, as a student participant of the 2015 Boston Summer Seminar, I was introduced into the Houghton Library Reading Room on Harvard’s campus for the first time.  By my side were my professor, Julia Randel, and one of Houghton’s archivists, the wonderful Irina Klyagin. They eased me into working in the archives, showing me how the database worked and helping me learn how to call things up from the stacks so that treasures would appear in front of my eyes without my knowing exactly where they came from. To be honest, it seemed to me like a bit of magic.

I began my research with a broad topic:  “The relationship between athleticism and artistry in 19th-century ballet.”  But I didn’t know where to go from there. I tried to make it sound like I had an idea of where I wanted to go; I mean, I was at Harvard for heaven’s sake! Soon enough, I found direction through the letters of Marie Taglioni (a prominent 19th-century ballerina), 19th-century performance almanacs, and books on the evolution of ballet technique.  I began to draw connections between 19th-century ballet and other art forms of the same period. I saw the importance of painting and poetry in the movement of Romantic ballet, and I realized that the plotlines of these Romantic ballets stemmed from previous works of 18th and 19th-century literature.

The Houghton Library Reading Room began to feel like home. The security guards knew me by name, and I would stop to shoot the breeze before passing through those doors. The routine wasn’t as agonizing or tedious as I had prepared myself for. Rather, the days slipped by quickly, beginning in the midst of new treasures and ending much too soon.

Over my three weeks in Boston, the city itself began to feel like home, too. Although those eight-hour days left my eyes blurred by looking at calligraphy and lithographs, I reminded myself that although this experience was predominately about the research aspect, when you find yourself in a new place, you must explore. And so I stretched my legs on the Freedom Trail. I rose at 7 a.m. on a Saturday to Uber my way to Walden Pond and spent the day away from the city. One Friday night, I found myself where any self-respecting Bostonian might: Fenway Park. I ate cracker jacks, bought a baseball cap, and participated in the seventh-inning stretch. I am a firm believer that wherever you find yourself for whatever reason, you should seek out those gems that make a place what it is.

If there is any piece of advice I would give to those students searching for a research focus, it would be this:  look for what excites and entrances you, something that makes walking into those archives everyday like a new quest. As I learned from the guest speakers we had, when you’re passionate about your subject, things have a way of coming together.