We’re excited to have a guest post from Claire Berman, a BSS 2015 alum and history major at Kenyon College (’16). 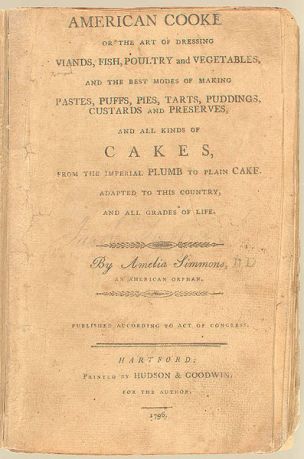 It’s the end of an unusually chilly June day when I find the gem I’ve been looking for: the recipe for Federal Pan Cake. This pancake, made of rye flour, “Indian meal”—i.e. corn meal—salt and milk, and fried in lard, was a recipe that first appeared in the second edition of Amelia Simmons’ American Cookery, the first American cookbook, published in 1796. I happened to find the Federal Pan Cake in New American Cookery, or Female Companion, a word-for-word reproduction of Simmons’ work written by “An American Lady.” Simmons’ pervasive recipes for the Federal Pan Cake, as well as her Election Cake and Independence Cake reappeared in many cookbooks of the antebellum period, sometimes word-for-word, other times as variations. While at the Massachusetts Historical Society, I aimed to dig through antebellum cookbooks and discover what they had to say about American culture, and more specifically, about the relationship the audience of these cookbooks had to native North American ingredients.

I had no idea that I would find a gem like the recipe for the Federal Pan Cake when I walked into the Massachusetts Historical Society. When I first walked into the marble lobby of the MHS at the start of the Boston Summer Seminar 2015, I felt a little intimidated, a little lost, but also incredibly excited. With guidance from Anna Clutterbuck-Cook, as well as Professor Dykstra—a seasoned MHS veteran—I was able to learn how to use the MHS effectively, spending the majority of my time looking at cookbooks, but also perusing some diaries and log books. While I walked into the MHS’s lobby with trepidation, I walked out with the beginnings of what would become my senior thesis: The Cook Exercises a Greater Power: The Economy and Autonomy in American Antebellum Cookbooks.

However, the program extended beyond the academic, at least for me. As someone who has eyed library science since childhood, having the opportunity to tour the inner-workings of some of the country’s most remarkable archives was an amazing experience. We saw the medical tools that infected President Garfield’s wounds and ultimately killed him at the Francis A. Countway Library of Medicine and Emily Dickinson’s writing desk at the Houghton Library, both libraries affiliated with Harvard University. My favorite behind-the-scenes moment was seeing paintings by American greats like John Singer Sargent in tall storage racks at the MHS! I adore working at my school’s archives and special collections, but walking through racks of boxes of the actual letters written by the founding fathers seemed almost surreal and was such an incredible moment for me.

Meanwhile, I had the opportunity to live in the heart of Boston. First of all: takeout galore; it was an extreme culinary opportunity for a foodie who has been living in rural Ohio for the past four years. But even better than the food was the history embedded in every path of that town. Literally, they have the Freedom Trail. But some of the best moments of my trip came from places I just stumbled on. I spent one evening at the Coolidge Corner Theater, an art deco feature of Brookline where I watched a double feature of Far From the Madding Crowd and Ex Machina in cozy nooks that have entertained Bostonians since the 1930s. While grabbing supper in the North End, I came across the building where Sacco and Vanzetti’s defense planned for their trial. Every walk across town brought into view something new.

I would have never experienced any of this were it not for the GLCA. A Midwesterner at heart, I rarely venture out to the East Coast, let alone have the opportunity to spend three weeks working in and exploring Boston. My only wish is that I could do it all again!